If you want to find the best whole house fan, you are in the right place!

Whole house fans can cool your home by using the "breeze effect" at a much lower cost than traditional air conditioning.

Check out our top picks below or keep reading to learn more about whole house fans and installation tips!

Only have a minute? Check out our top 4 whole house fans! Keep reading for our buyer's guide and product details.

However, ducted whole house fans tend to be much more expensive, and QuietCool has cornered the market on these fans as the patent owner.

How To Size Whole House Fans?

One of the most important things to look at when buying a whole house fan is it’s CFM rating—this stands for Cubic Feet per Minute. This is a rating that will tell you how much air the fan moves.

If you buy a too powerful whole house fan, it will use more energy than you need, and there probably won’t be enough attic venting for it to work properly. Each manufacturer will have it’s specific recommendations for maximum attic size or home size.

A general rule for fan sizing is also mentioned by Kansas State University.

First, determine the volume of your home. Take the square footage of your home, and multiply that by the ceiling height. Then select a fan with a CFM rating that is 2/3 of your home’s volume.

What Is A Whole House Attic Fan?

To learn how to use a whole a house fan, check out my guide here.

Read Also: How Does A Whole House Fan Work?

Whole house ventilation fans can be a great way to cool your home because hot air already wants to rise to the top level of the home. This is why basements are usually cooler during the summer. This phenomenon is known as the “stack effect” because your home almost acts like a chimney stack.

The whole house fan takes advantage of this stack effect, and sucks out all of the rising hot air from the home interior.

Traditional And Yet Effective Cooling

Thomas Jefferson even designed his Monticello home in Virginia to take advantage of the rising effect of warm air through a central great hall and a cupola at the top of the home which is almost like a decorative chimney.

In fact, whole house fans were the first electrically powered air conditioner from the early 1900’s. And yet, whole house fans are still incredibly effective — especially when the outdoor air is cooler than the home’s interior, such as when the air cools at nighttime.

A high quality whole house fan can reduce your air conditioning costs during hot weather anywhere from 25% and all the way up to 90%. With some homes, all that is needed is to run the fan for 30min up to an hour. Some owners like to keep the whole house fan on because it creates a small breezy feeling in the home.

How Do Whole House Fans Work?

Whole house fans work by using fan suction, creating a negative pressure environment in the home, and putting positive pressure in the attic. Put simply, the fan sucks out the hot air from the interior and pushes it outside through the attic vents.

According to the U.S. Energy Department, a whole house fan should move about 30-60 air changes per hour which will vary based on your climate, the layout of your house, and other factors. Some whole house fans use direct drive motors and others use belt drive. In general, the belt driven motors are quieter than direct drive.

How To Use A Whole House Fan?

I remember turning on a whole house fan once during an inspection, and I forgot to open a few windows. When I turned on the whole house fan, it caused a few interior doors to slam shut by the suction power — causing a little scare to my client.

Whole house fans almost always come with two fan settings; high and low. Some fans come with a simple pull chain for on/off and high/low settings. Other fans will have to be wired to a wall switch with two separate switches. In addition, you can wire the whole house to a remote controller so you can turn it on anywhere in the home, a very nice feature.

Besides a remote controller, another possibility is to wire the whole house fan to a thermostat. The fan will turn on automatically when the home reaches a certain temperature.

There are some risks to wiring a whole house fan to a thermostat however. What if you have a gas-fired water heater and the whole house fan turns on when you are away without any open windows?

This may cause the water heater to “backdraft” which means that the combustion air from the water heater is being pulled into the home rather than going outside. If you have gas-fired appliances, it’s always a good idea to have a carbon monoxide alarm on each level of the home.

Read Also: How To Use A Whole House Fan In A Two Story House?

How To Install Whole House Fans?

If the whole house fan can be installed within the ceiling joists, it is called a “joist in” installation, and it is much easier to install.

A “joist out” install means that at least one joist will need to be cut to allow access. This may cause structural damage if done improperly, and a qualified contractor to help is recommended.

As reported by Home Energy Magazine, a better way to install a whole house fan than cutting a joist is to install an H-bracket, which allows you to install the fan above the ceiling joists. Even though this will lower the efficiency a bit, it may be preferable to cutting a joist.

Read Also: What Are The Best QuietCool Whole House Fans?

Is There Enough Attic Venting?

It is important to know how much attic venting is required for the size of the whole house fan that you are considering to purchase.

If the attic venting is inadequate, then the hot attic air may actually be pushed down the walls and back into the interior of the home. Each manufacturer will tell you how much attic venting is required for their model, and it is usually stated in square feet or square inches.

As a general rule for traditional whole house fans, you want to have at least 1 SF of attic venting per 750 CFM of fan speed. To add up your attic venting, you will have to go into your attic, and estimate the sizes of your ridge vent, gable vents, and any passive vents.

It is also important to note that insect screens on gable vents substantially reduce airflow.

How is a Whole House Fan Different From Air Conditioners?

Read Also: How Does A Whole House Fan Work?

What Is The Best Whole House Fan?

Here are my top picks with their pros and cons...

My #1 top pick for the best whole house fan goes to the Energy Saver by QuietCool. This whole house fan is rated at 5,003-cfm and it is suitable for attics up to 2,700 square feet.

This QuietCool ducted whole house fan is hung from the attic rafters (instead of installed in the ceiling) which can greatly reduce noise and vibrations.

The Energy Saver model also features a ultra high efficient brushless motor (AC/DC) that will make it even quieter and use less energy. As in all of the QuietCool fans, it also has pressurized gravity dampers to give it a tight seal when not in use.

Cool Attic also makes a 30-inch model that is for attics up to 3000-sf. This fan is made in the USA, and it is powder coated for a long lasting finish.

Unlike many other whole house fans, this Cool Attic model has four fan blades (instead of three) so it can move more air. You can do a joist-in or joist-out installation with this Cool Attic fan.

The Tamarack is a unique whole house fan that features self-sealing insulated doors with an R38 rating.

Unlike other whole house fans that leak air into and out of the attic, the Tamarack unit creates an air-tight seal.

My #1 pick for best whole house fan goes to the QuietCool Classic Series.

These ducted whole house fans are hung by the rafters inside of your attic, which greatly reduces their noise and vibrations. The QuietCool fans are also much more energy efficient than the traditional whole house fan.

The Quiet Cool product line has fans in range from 1400 CFM all the way up to 7000 CFM so you can choose the whole house fan for your exact home size.

QuietCool also sells a Control Kit that will allow you to control the fan from anywhere in the home (sold separate). 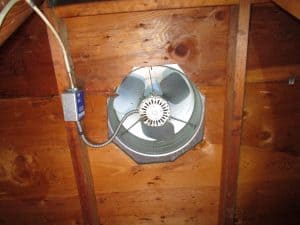 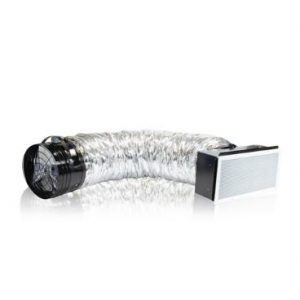 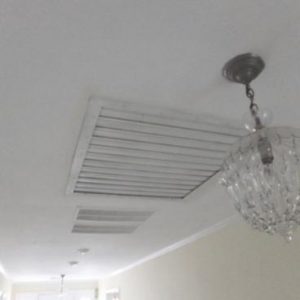 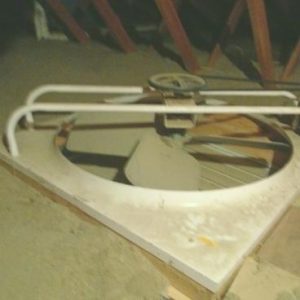 How To Use a Whole House Fan In A Two Story House (Easy?)

How To Use a Whole House Fan In A Two Story House (Easy?)