Nothing can be more unnerving than smelling a burnt odor from a dryer.

Most of the time, it is from a clogged dryer vent that gets very hot and burns.

Lint is a highly flammable substance, and if your dryer duct hasn't been cleaned in a while, lint can easily smolder and even catch on fire.

In this HomeInspectorSecrets.com guide, I will go over..

Keep reading to learn our 8 steps to fix a dryer that has burn smells.

Why Does My Dryer Smell Burnt?

The most common reason that a dryer smells like burning is due to a clogged dryer vent.

When a dryer vent gets clogged with lint, it can partially or totally block air flow, causing the temperature in the dryer vent to rise.

As the temperature rises, it can ignite highly flammable lint. There may actually be flames, or it may just be a small ember — releasing the smell of something burning from the dryer.

I have been inside homes where there have been dryer vent lint fires. As the ember turns into a real fire inside the dryer duct, it spreads in both directions of the duct — towards the dryer end and towards the exterior vent hood.

According to the National Fire Protection Association, there were 13,820 home fires from 2014-2018 related to dryers.

Read Also >> Why Is There Water In My Dryer Vent?

Supplies You'll Need For Fixing Burn Smells From A Dryer

Here are a few of the supplies that you'll need to diagnose burn smells from a dryer:

Read Also >> How To Hook Up A Dryer Vent In A Tight Space?

What To Do If Your Dryer Smells Like It's Burning?  (8-Step Guide)

Step 1. Unplug The Dryer To Cut Off Electricity

Unplug the dryer from the wall outlet so that there is no electricity flowing into the dryer.

I would also get a fire extinguisher handy just in case it turns into a dryer fire.

Step 2. Disconnect The Flex Vent Behind The Dryer

Pull the dryer away from the wall so you can get access to the flex duct.

The flex vent is the small flexible vent that runs from the dryer to the wall. These short ducts are usually flexible metal or a foil type of vent, but sometimes they are rigid metal.

You may need to remove clamps (and possibly foil tape) holding the duct to the dryer and to the wall.

Step 3 - Inspect The Flex Vent For Burning, Damage, Or Clogs

Check the flexible dryer vent behind the dryer for any charring or evidence of burning.

Also look for any indications of lint clogs, or other damage.

These small sections of ducting sometimes get clogged or even crushed behind the dryer — restricting air flow. The flex vent needs adequate space so it doesn’t restrict air flow.

Read Also >> How To Vent A Dryer If There Is No Outside Access?

Step 4. Inspect the Wall Duct From The Inside

Use a flashlight to look inside the wall duct after you have disconnected the flex vent.

The wall duct is the portion of the duct that goes to the outside. This duct should be made out of rigid metal ductwork and not flex duct.

You can take  a flashlight and look inside the wall duct for any issues.

Step 5. Inspect The Duct That Is Inside The Dryer

Use a flashlight to inspect the duct that is inside the dryer.

Sometimes the clog can be in the portion of the duct that is inside the dryer, about 12-18 inches. You may even want to reach your hand deep inside the dryer duct to feel for a blockage.

You can also turn the dryer on to feel for air flow from the dryer after you have removed the flex duct.

Step 6. Inspect The Exterior Vent Cover For A Blockage

Inspect the exterior cover for blockages and airflow problems.

The exterior vent hood or cover can get blocked with lint.

According to the Energy Department, birds sometimes nest in unprotected vent openings like dryer ducts.

If the vent hood is on an exterior wall, it may be pretty easy to inspect. However, if the dryer vent goes to the roof, soffit, or crawlspace — you may want to hire a professional to check it out.

Dryer vents also commonly have pest screens to keep out animals like birds. Frequently, these screens have overly small holes which trap lint and also lead to blockage.

When you are inspecting the exterior vent hood for problems, I would also shine a flashlight into the duct to look for a blockage that may be causing the dryer to smell like burning.

Read Also >> How To Repair A Dryer Vent Hose?

Reconnect the flex vent and turn the dryer back on to test it for burn smells.

It would be a good idea to keep one person near the dryer with a fire extinguisher while another person quickly checks the air flow outside.

Turn the dryer back on, and put your hand up to the exterior vent hood. There should be strong air flow.

If the air flow is very weak, or if there is none at all, then you know there is still a clog somewhere on the interior of the dryer duct. You want to do this step very quickly so you don’t cause any more burning smells from the dryer.

Schedule a professional dryer duct cleaning if there are still burn smells or restricted airflow.

Just keep in mind: there is a possibility that the dryer duct is disconnected somewhere inside the wall. If this is the case, you will need to hire a qualified contractor to repair the issue.

Read Also >> How To Clean A Dryer Vent On The Roof?

Other Reasons For Burn Smells From A Dryer

Here are a few other reasons that your dryer can produce smoky smells:

Sometimes the burning smell from a dryer can be because the homeowner doesn't regularly clean the lint trap.

New homeowners sometimes don’t understand that dryers have lint traps that should be cleaned after every drying cycle.

A strong burning smell may be due to a failing thermostat.

If the thermostat went bad, it will be unable to sense the temperature inside the dryer, allowing it to get way too hot.

In this case, it may release a weird smell such as of something burning.

Probably the easiest thing to do is just replace the thermostat.

If the thermostat is still good, the burning smell may be from an overheated dryer motor.

If the dryer motor is going bad, it will likely have a lot of noise as well.

Hiring a qualified appliance technician to check out your motor for possible replacement is recommended.

If you have an older dryer, it may be using a rubber belt to move the dryer drum.

Rubber belts can get degraded and melt which could possibly release a burning smell.

Almost always, burn smells from a dryer are due to a lint clog, damage, a disconnected duct, or other problems that result in restricted airflow.

Anytime the airflow becomes restricted, it will cause the dryer to overheat, and may even cause embers inside the dryer or the dryer duct. Lint is a highly flammable substance, and it can easily smolder or burn it the dryer and duct gets too hot.

But there are also other reasons for a burn smell such as a failing thermostat, an overheated motor, and a failing belt drive. 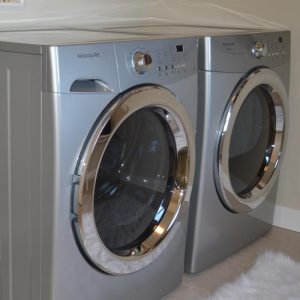 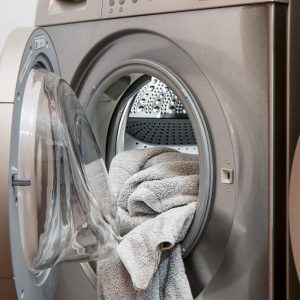 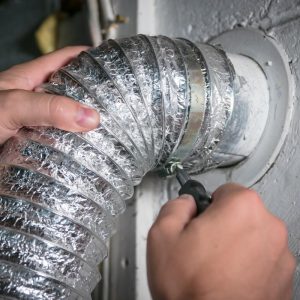 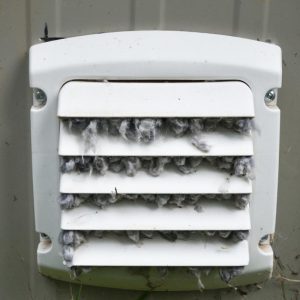 How To Clean Dryer Vent On Roof? (6 Step Guide)