Is your toilet making noises and you want to know what it means?

Toilets can make different sounds depending on the cause, but the two most common sounds are from fill valves and flush valves — leading to running water sounds.

In this guide, I will go over…

The most common noise from toilets come from incorrectly working fill valves and flush valves. If the tank keeps filling up with water, then the flush valve or ‘flapper’ isn’t keeping it’s seal on the bottom of the tank — allowing water to drain and activating the fill valve.

The toilet running sound is from the fill valve operating. And if the fill valve is not adjusted correctly, it may be overfilling the tank which spills water back into the toilet bowl through the overflow tube.

For more details on all of the possible toilet noises, keep reading…

A faulty or improperly adjusted fill valve is one of the most common sources of toilet noises. The fill valve is a device that allows water to flow into the toilet tank when the ‘float’ is activated. The float is the air filled container that rises as the tank fills with water, and activates the fill valve.

Many homeowners don’t realize that if the fill valve is adjusted incorrectly, it will overfill the tank, causing water to spill into the toilet bowl (through the overflow tube), causing a ‘running water’ toilet sound.

It is important to set the water level in the tank at 1/2-inch to 1-inch below the top of the overflow tube.

The easiest way to see if your fill valve is operating correctly is to remove your tank lid and watch the tank fill with water. If the tank fills with water to about 1-inch below the top of the overflow tube, then it is set correctly.

Read Also: What Are The Best Dual Flush Toilets?

There should be a screw or knob on the fill valve that you can turn to adjust the float. Turn the knob counterclockwise to lower the water level, and clockwise to raise it.

With older style floats, it is a rubber filled sac that is connected to the fill valve with a metal rod called a float arm. To adjust the float arm, you will have to bend it upwards to raise the water level, and bend the metal rod downwards to lower the water level.

If your fill valve actually activates (and you are sure it isn’t the flush valve or ‘flapper), then it there may be a hairline crack in the fill valve that is leaking.

This means that the tank will drop in water, which will activate the fill valve — causing a toilet noise. The noise of a fill valve activating will be louder than a tank that is overfilling.

If you are sure it isn’t the flapper valve, then it will probably be some crack in the fill valve and you will need to replace it.

If you hear a high pitched squealing from your toilet after you flush, it may be coming from a defective fill valve.

The easiest way to stop the squealing is to just replace the fill valve.

If the flush valve isn’t sealing correctly, it will allow the tank to drain, which will activate the fill valve leading to a gurgling.

The gurgling sounds you hear is from the toilet bowl filling with water slowly from a leaky flapper valve. You can verify this by looking for water ripples in the toilet bowl.

The first step should be to inspect the flush valve. If it feels hard and inflexible, then you have a very old flush valve, and it should be replaced. Is there any damage along the edges of the flush valve that may allow water through?

You need to have some slack in the chain so the flush valve seats properly. However, if you create too much slack in the chain, when you flush the toilet, not all of the water in the tank will drain leading to a poor flush.

Read Also: What Are The Best American Standard Toilets?

If when you flush the toilet, you hear a gurgling sound, it may be from a partially clogged drain. The easiest way to solve this problem is to use a toilet plunger.

If a simple toilet plunger doesn’t work, hiring a qualified plumber is recommended. Just be sure that the sound isn’t coming from the toilet tank itself.

The easiest way to remove the air bubble is to close the water valve, and then reopen it. If there is still a loud vibration, the next step would be to shutoff your entire homes water, drain all of the fixtures, and then turn back on the water.

You may need to consult a qualified plumber if draining your home’s water didn’t remove the air bubble — you may need to install a new shutoff valve.

Read Also: What Are The Best Bidet Toilet Seats?

If after you flush, you hear a loud banging sound, it may be water hammer. Just be sure that this sound is coming from your pipes, not the toilet and not the water valve.

Water hammer is a type of hydraulic shock that forms with the rapid acceleration or deceleration of water. As you flush the toilet, water surges through the pipes and into the toilet, and suddenly stops when filled. Due to the configuration of your piping, the sudden stop or changing of direction may cause water hammer which rapidly vibrates or shakes the piping. 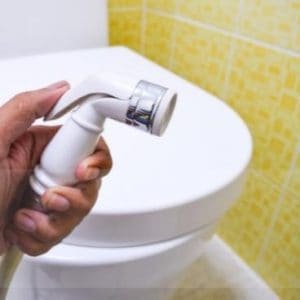 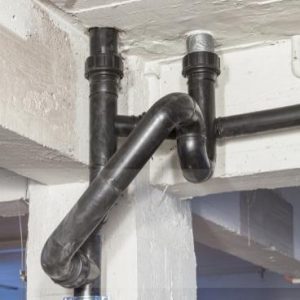 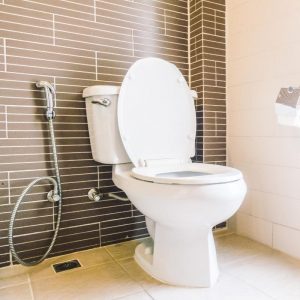 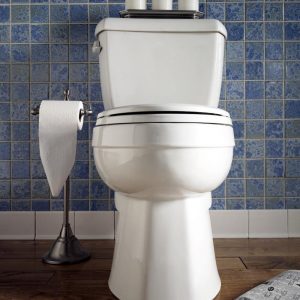 What Does It Mean When Your Toilet Bubbles And Burps? (2023 Guide) 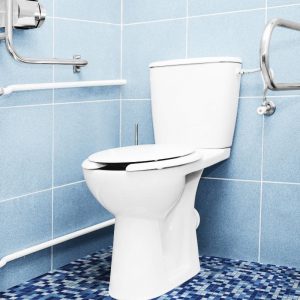 How To Flush A Toilet When Water Is Off? (2 Step Guide) 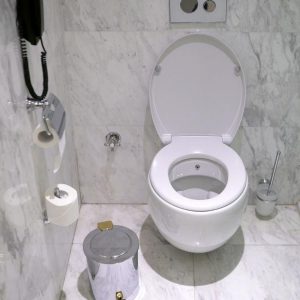 How To Unclog A Slow Draining Toilet (4 Simple Methods)

What Does It Mean When Your Toilet Bubbles And Burps? (2023 Guide)

How To Flush A Toilet When Water Is Off? (2 Step Guide)