The nicest feature of pivot shower doors is that they can swing either inwards or outwards unlike hinged shower doors.

In this install guide, I will go over…

What Are The Basics of Installing A Pivot Shower Door?

The most important step in installing a pivot shower door is deciding which side the pivot be installed. Most manufacturers recommend installing the pivot on the far side of the shower head. Either way you choose, you will want to make sure that the pivot door swings freely and doesn’t hit anything.

Thoroughly reading the manufacturer installation manual is strongly recommended prior to attempting a pivot door install.

The installation steps below are based on the manufacturer recommendations for installing a Sterling pivot shower door.

Step 1. Choose The Pivot Side

The first step with a pivot door installation is to choose which side you want the shower door to pivot.

Also, whichever side you choose, make sure that there aren’t any obstructions when you swing open the door (either outwards or inwards).

Before you cut the bottom door track, you will need to take a measurement.

Take a tape measure and place it on the flat part of the shower ledge from end to end. If your corners have any curves, make sure to measure above these areas.

Once you have the measured distance along the full length of the shower ledge, the so-called ‘cut length’ — you will need to cut 9/16-inch off of the non-pivot end based on this measurement. Measure from the end of the pivot side your cut length and subtract 9/16″.

Please verify that you are cutting the correct side of the shower door track — again, do not cut the pivot side. You can cut the end with a miter saw or a hacksaw, and make sure to file or sand the cut smooth.

The U-channel is a small metal piece that helps secure the glass shower door, and it slides over the non-pivot side of the bottom track.

Before sliding on the U-channel, trim off an excess hollow seal.

You grease the non-pivot door track with some silicone lubricant to make it easier to install. Line up the U-channel with the track, and slide it into place.

Place the bottom track on the shower ledge, and make sure that there is at least a 1/4-inch of space between the shower wall and the non-pivot end of track.

Once the track is on the flat part of shower ledge, install some tape over the door track in a few spots to keep it on the ledge. Mark the shower ledge with a pencil along the front of the track. And now, insert the supplied bushing on the pivot hole, and the plastic plug into the other hole of non-pivot end.

Read Also: What Are The Best Framed Shower Doors?

After you have secured the bottom track with tape, it is time to prep and drill the fastening holes for the wall jambs (vertical frame).

Take the wall jamb with the slots — the strike jamb — this is the wall jamb that is closest to shower head, and place it against the wall. You will need to make sure that the slots on the jamb is toward the shower side.

Use a bubble level to make sure the the jamb is perfectly vertical, and take a pencil to mark the screw holes onto the tile.

Drilling Into The Tile

Remove the strike jamb, and don some safety glasses. Lightly punch the markings with an awl or punch. This ‘light punch’ will make it easier to drill the holes. And now, using a 3/16″ masonry drill bit, drill the holes into the shower tile.

Make sure to thoroughly clean the area, preferable with isopropyl alcohol or something similar. After cleaning, insert the plastic plugs into the drilled holes that was provided with the door.

For the other wall jamb, you will want to follow the exact same procedure, but you want to make sure that the correct side is facing the shower. For this Sterling pivot shower door, the longer part of jamb is supposed to face the shower (or in the inside).

After prepping the wall jambs, it is time to install the bottom track.

Flip over the bottom track and apply a bead of caulking to the underside of the front lip (the side on the outside from the shower).

Fasten the shower door track onto the shower ledge using the pencil marking made earlier.

Starting with the pivot jamb, the side away from the shower head, insert the bottom of the door track, and align the holes.

Secure the jamb with the provided screws, making sure that it is level before fully tightening the screws. Repeat this procedure with the strike jamb.

Now that the wall jambs are fastened to the wall, you should apply a bead of clear silicone caulking where the wall jambs meet the bottom door track.

Cut off the excess from the top track on the strike end (not the pivot end) just like on the bottom track. If you cut off the pivot end the glass door will not install properly.

And similar to the bottom track, you will want to sand or file it smooth.

Read Also: What Are The Best Semi-Frameless Shower Doors?

Place the top track securely over both wall jambs.

Using a 1/8″ drill bit, make a hole into the groove and through the track and into the jambs on both sides.

And now you can fasten the provided screws into the pre-drilled holes.

Slide the provided expander jamb into the strike jamb and line up the screws. Use a bubble level to make it plumb.

Fasten the expander jamb to the strike jamb with the screws.

Apply a bead of caulking to the underside of the U-channel. Lift up the narrow glass panel and slide into the U-channel at bottom and the top track.

After installing the glass panel, you will have to assemble the pivot bushing and bolt. Tighten the bushing bolt firmly.

Assemble the top pivot and tighten securely according to manufacturer directions.

Read Also: What Are The Best Fully Frameless Shower Doors?

Now it’s time to fasten the main glass pivot door. Verify that the bottom of the glass door doesn’t rub on the seal.

Make sure that the door is aligned, and you may need to loosen the top pivot bolt to get it plumb.

To prevent water damage, you want to caulk where the wall jambs meet the tile wall from inside the shower.

You will also want to caulk the edge of the bottom track and the inside of the shower ledge. Caulk anywhere else that the manufacturer recommends.

One basic thing I always check as a home inspector is that the shower door or enclosure isn’t leaking. I turn on the shower, and spray it at the door — looking for leaks.

How Hard Is It To Install A Pivot Shower Door?

Pivot shower doors are harder to install than hinged shower doors due to the complexity of the upper and lower pivot assembly. You will have to take numerous measurements, make adjustments, and follow the manufacturer recommendations.

Other than assembling the pivots, the main difficulty will the drilling of holes into the shower tile without damaging the wall. Having a helper will likely be needed when securing the glass shower door and the fixed glass panel to the upper/lower tracks. 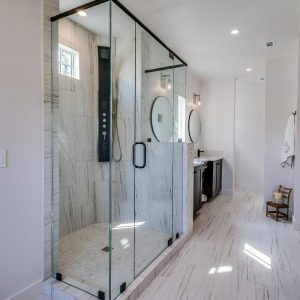 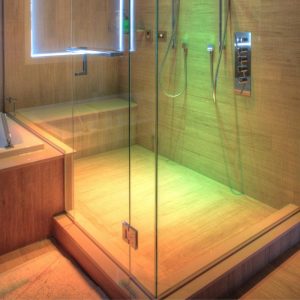 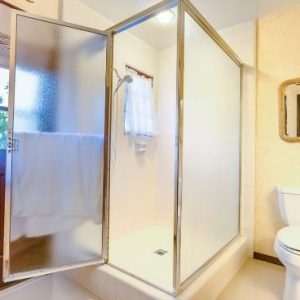 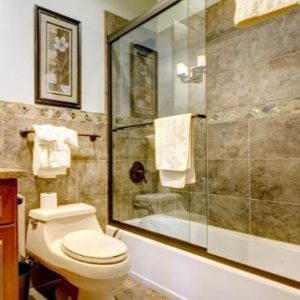