What Is The Fan In The Bathroom For? (8 Uses of Exhaust Fans)

The main purpose of a bathroom exhaust fan is to remove moisture.

But they can also be used for other things like additional bathroom lighting, heating, and to remove smells.

You may also want to read my guide on what you need to know before buying bathroom fans.

In this guide, I will go over the top uses of exhaust fans such as…

The main use for a bathroom fan is to remove the excess humidity and moisture in the bathroom. Whenever someone takes a shower or bath, a significant amount of moisture is released into the air which can cause damage to the bathroom and home if left unchecked.

Excess moisture can be easily cleared by a quality bathroom fan, and it can remove the moisture in a short period with a properly installed and rated exhaust fan. Bathroom fans should always be ducted to the exterior of the house and not into an attic, crawl space, or interior wall.

What If I Just Open A Window?

The only real comparison to a bathroom fan is a window, and that is how bathrooms were ventilated before exhaust fans became the norm.

The problem with windows is that they allow in unconditioned air which lowers the efficiency of your HVAC system. In addition, who wants to open a window when it is very cold or hot outside?

Not only does it have a negative influence on your HVAC system, but it will also re-introduce moisture back into the home from the exterior.

Basically, bathroom fans are quicker and more effective than opening a window.

Read Also: What Is The Venting Code Of Bathroom Fans?

Another nice feature of bathroom fans is that they can be controlled by timers and even humidity sensors.

es will automatically turn off the bathroom fan to save energy.

Another major use of bathroom fans is to remove nasty odors. Obviously, bathrooms can get very stinky, and nobody wants to smell someone’s business.

And for occupants who neglect to use bathroom fans during ‘their business’ — you can even get a bathroom fan that has a motion sensor to automatically turn it on and off.

The wonders of modern technology.

You can also install a bathroom fan that has other features like LED lighting, a bluetooth speaker, and even a heater.

So instead of installing a second appliance such as a light which involves cutting a secondary ceiling hole — you can have the bathroom fan include a built-in light or heater. However, you still may have to add extra wiring for these other features.

Read Also: How To Replace A Bathroom Fan Without Attic Access?

If the bathroom fan is used properly which means using it during showers and 20-min after the shower — then it should prevent mold growth.

Mold only needs three things to grow: moisture, food, and darkness. The moisture in a bathroom can linger for a long time after a shower or bath resulting in the perfect breeding ground for mold.

I have also seen mold growth in hallways and other areas of a home because the bathrooms weren’t effectively ventilated.

If you suspect you may have a mold issue in a home (especially basements) it is a good idea to buy a few humidity gauges. These cheap devices (around $10-$20) will tell you the relative humidity levels of your home, and you should strive to keep the indoor humidity between 30% to 50% to prevent mold growth.

Bathrooms can get pretty hot during showers, and when you couple this hot air and excessive moisture, it can cause paint damage such as bubbling and peeling.

Having a bathroom fan (and using it correctly) will significantly reduce the likelihood of paint damage.

For the paint type, I always recommend going for either semi-gloss or satin for a bathroom. Satin finishes are much more durable than back in the day, and they can stand up to the abuse of a modern bathroom.

Read Also: Can You Vent A Bathroom Exhaust Fan Into An Attic?

Another use for bathroom fans is that they can prevent hardware rusting.

Things like cabinet/door knobs and hinges are subject to rusting if exposed to moisture for a long time. And it would be a pain in the neck to replace door hardware.

Bathroom fans can also help prevent drywall damage. When drywall gets wet or infiltrated with high moisture, it can warp and degrade.

In bathrooms, this usually happens in the ceiling corners, or in the low areas next to the bath tub. When I’m inspecting a home, I always knock on these corners to check for soft spots.

Read Also: How Do You Clean A Bathroom Exhaust Fan?

Use 8. Clear Fumes When Cleaning

Bathroom fans can be handy when you are using harsh cleaners such as a toilet bowl cleaner. 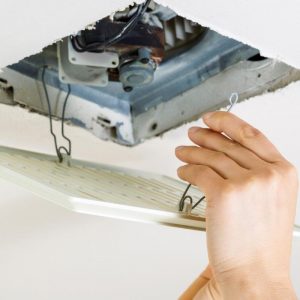