A clean bathroom exhaust fan will just work better—it will exhaust more air and it will run quieter.

It also will reduce any possible fire hazard due to the build-up of dust.

As dust accumulates, it can literally choke the motor, causing it to overheat and start a fire.

In this HomeInspectorSecrets.com guide, I will go over...

Keep reading to learn how to clean your bathroom exhaust fan and other useful tips!

Bathroom exhaust fans should be cleaned on a regular basis.

They can get choked by all of the dust on the cover and motor, and they a dirty bath fan will make a bad impression to visitors (or possible buyers). But most important if all, a dirty bathroom fan will reduce its performance by restricting airflow.

A dirty bath fan can even become a fire hazard if the fan motor overheats. Fortunately, most newer bath fans have overheating safety switches, but older fans likely will not have this safety feature.

Read Also >> How To Oil A Bathroom Exhaust Fan?

The supplies that you'll need to clean a bathroom fan are pretty simple, but the most important of all is a screwdriver or cordless drill so you can remove the fan motor assembly from the housing. Here are a few of the supplies you will need:

Read Also >> How To Remove Bathroom Exhaust Fans From The Ceiling?

How To Clean Ceiling Fan In Bathroom? (9 Step Guide)

Step 1 - Shut Off Power At The Electrical Panel Box

Shut off the power to the bathroom fan by flipping the breaker at the panel box.

You can verify that power is off to the bath fan by using a non-contact voltage tester.

With these simple testers, just getting close to a wire or switch will light up the tester (and it may beep as well).

Remove the bathroom fan cover from the ceiling for access to the fan motor.

Gently pull on the sides of the fan cover, and you should be able to pull it down about an inch.

If there is an LED light as part of the cover, you may also need to unplug the light as you pull off the cover.

Read Also >> Why Has My Bathroom Fan Stopped Working?

Clean dust off of the bath fan cover by washing it in the kitchen or utility sink.

Simply take a sponge (or brush) with a little bit of dish soap and scrub off the dust and debris.

Clean the bathroom fan housing and motor with a vacuum brush attachment.

If you want to leave the exhaust fan motor inside the ceiling, you can try to clean it with a vacuum.

You may also be able to remove a lot of the dust with a can of compressed air.

Remove the bathroom fan motor assembly from the housing for a deeper cleaning.

It is sometimes difficult to clean a bathroom fan without actually removing the fan.

In order to remove the bathroom fan, you will have to remove a few screws holding the exhaust fan to the housing. There may be a few small metal clips that have to be unclipped.

Homeowners may have to unplug the bath fan from an electrical outlet as shown in the picture below (not all bath fans have a housing outlet).

Read Also >> How To Check A Bathroom Exhaust Fan?

Make sure that the fan blades are moving freely and that it spins smoothly.

Clean the bathroom fan housing (that is still in the ceiling) with your vacuum brush attachment.

Since you have removed the fan motor assembly, the housing has full access for you to clean with a vacuum (or wipe it down with a cleaning wipe).

Make sure that the damper or flapper freely moves and is clean of dust.

Read Also >> How To Stop Condensation Inside A Bathroom Fan?

Re-install the bathroom fan motor assembly onto the housing.

Plug the fan back into the housing if there was an outlet.

Step 9 - Re-install the Bathroom Fan Cover To The Housing

Put the bath fan cover back onto the housing.

Squeeze the metal clips together and align them with the holes on the housing.

Why Clean The Bathroom Fan Duct?

Bathroom fan ducts (similar to dryer ducts) can sometimes get blockages in the vent which needs to be cleaned and removed.

The most common culprit of a blocked bathroom vent is a birds nest, but other critters can sometimes get inside. Especially if you clean the bathroom fan, but it still doesn't seem to be exhausting much air, then a duct clog can be the problem.

Bathroom fans should be exhausting to the outside, either to a wall or to the roof. These bath fan covers have flaps which open when the fan is turned on, and they automatically close when the fan is off.

Bathroom fans also frequently have pest screens which help keep out animals such as birds (as well as insects). Birds frequently like to make nests in bathroom vents as well as dryer vents.

Read Also >> How To Fix A Noisy Bathroom Exhaust Fan?

To check the air flow, simply turn the bathroom fan on, and put your hand in front of the exterior vent to see if it is properly exhausting air. If it feels very weak, or if there is no air flow at all, then you know there is some obstruction, and it will need to be cleaned.

Why Do Bathroom Fans Need To Be Cleaned?

A dirty bathroom fan that is choked with dust will slow down its speed and airflow.

An older bathroom fan motor may even overheat and result in fire. Newer bathroom fans typically have thermal shutoffs which turns off the fan if it overheats, but it isn't something to depend upon.

The CPSC.gov even reports a case of bathroom fan cover that caught on fire and fell into a toilet.

If the ventilation fan isn't adequately exhausting air, moisture will build up in the bathroom, and may lead to mold problems or even wall damage. It will also greatly reduce the indoor air quality of the home due to excessive moisture (and smell).

The truth is that most people rarely (if ever) clean their bathroom exhaust fans. During my home inspections, I have seen many bathroom fans that are almost fully blocked by dust.

Read Also >> Why Does My Bathroom Fan Leak When It Rains?

How Often Should You Clean A Bathroom Exhaust Fan?

It is recommended to clean your bathroom fans at least every 6 months by the Fort Mill Fire Marshall.

If you don't take the motor out of the housing, you can at least clean the cover, and use a can of compressed air (or vacuum brush attachment) to clean the fan while still in the ceiling.

If you have easy access to the outside cover, we recommend that you periodically turn on the bath fan and check the exterior for strong airflow.

If the airflow reduces or becomes weak, you know that the bathroom fan needs to be cleaned.

Cleaning a bathroom fan isn't too difficult for a handy homeowner to accomplish. Cleaning a bath fan at least once a year for spring maintenance would be a good idea.

In fact, it is significantly easier than cleaning a furnace blower fan. With the HVAC blower fan, you will have to remove numerous wires (and remember which goes to which), and it usually takes an hour or two — it is an ordeal.

With a bathroom fan, there are just a few electrical wires, and the fan is much smaller.

And don't forget that the quietest bathroom fans tend to have the cleanest motors, blades, and vent hoses because it reduces air friction. 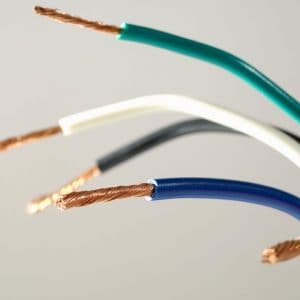 How To Wire A Bathroom Fan And Light On Separate Switches? (14-Step Guide)